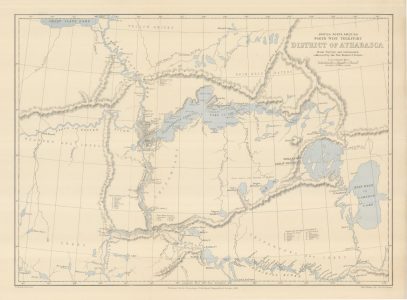 Back on the 23rd of November in 2018, I was looking for a surveyed-triangulated map of areas that I have worked in Northern Saskatchewan up into the Northwest Territories. This map published in November 1883 shows the District of Athabasca in the North-West Territory of Canada.  It includes all of the places in Northern Saskatchewan where I worked. It does not go far enough North to include Yellowknife on Great Slave Lake where I worked in NWT. This map was created from Surveys and information collected by the Reverend Émile F. S. Petitot for the article On the Athabasca District of the Canadian North-West Territory and can be found on page 688 in the Proceedings of the Royal Geographic Society and Monthly Record of Geography [Vol. 5, No. 11 (Nov., 1883) pp. 633-655] (https://dx.doi.org/10.2307/1800677).

The advantage of the speed of using modern day satellite data for cartography is clear in the first paragraph of Reverend Petitot’s article which can be found on page 633:  Some nine years ago, I wrote a short article on the Fur District of Athabasca, which was inserted in the Bulletin of the French Geographical Society for July-September 1875, and was also twice published separately.  My subsequent journeys on the Upper Athabasca river and a stay of some months on the lake of the same name, have enabled me to collect fresh topographical, statistical, and historical material on this great district of the Canadian North-west; so that I have had to recast my former account in order to interpolate these recent acquisitions as well as my personal observations.

And as can be seen in section II on page 645 of the same article:  It is obviously impossible that very exact cartographic representations should exist of so vast a lake, which has only one or twice been visited by scientific observers, and then only partially, having never been explored as a whole.  I have therefore here also to make some alterations in the map now current.  It would, however, be wearisome to enter into a minutely detailed description of all the bays, isles, and capes, for which the map  accompanying the present paper must be constructed.  Satellite imagery does collect cartographic points more accurately and quickly than surveying by hand.  It is still an accurate map of the District of Athabasca considering the time consuming constraints necessary to collect data.  Of note, Beaverlodge Lake is not included on the map.  The team may not have explored into that area despite the fact that at around Hare Point it is about 200 metres (218 yards) between the two lakes.

There have been operating uranium mines on the North Shore of Lake Athabasca.  The Nicholson Mine is one. Also on the North Shore were two gold properties close to Goldfields, Saskatchewan (59° 34′ 34″ North and 108° 43′ 29″ West) – one operating mine, the Box Mine, and an underground bulk sample project, the Athona Property.

The geology and mineral occurrences between Lake Athabasca and Great Slave Lake will be an interesting study. Are there places in that area with ore potential?